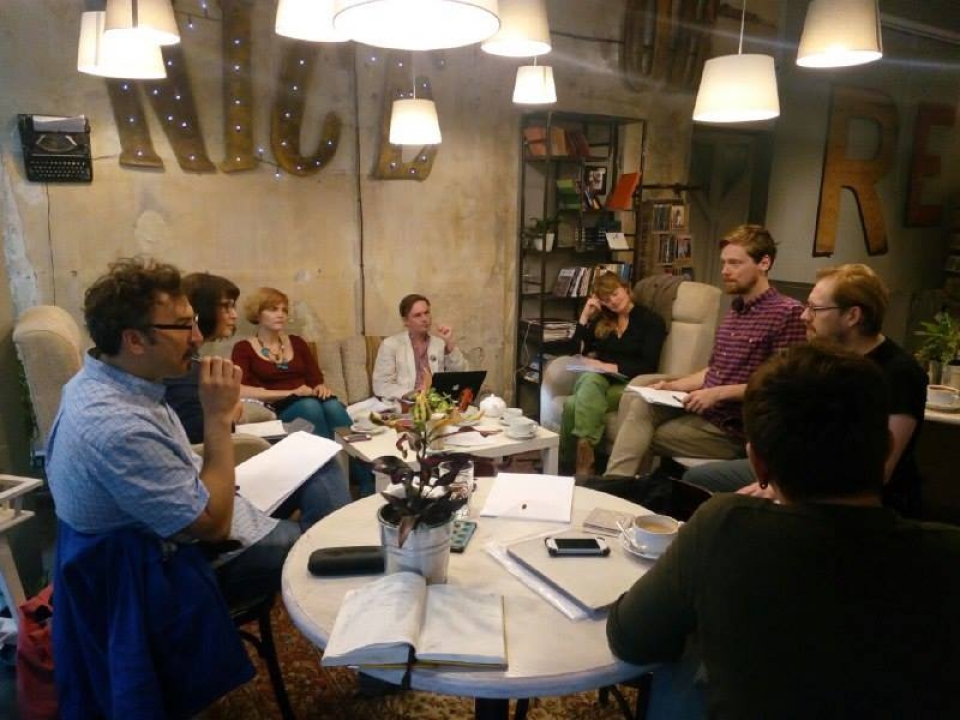 From 7th until 12th September, an international Poetry Translation Workshop was held in Riga. Eight poets from Latvia and Britain translated each other’s works during the workshop, and the project was concluded with a public poetry reading in the cosy book café “NicePlace Mansards”.

Latvia was represented in the workshop by Inga Gaile, Anna Auziņa, Krišjānis Zeļģis, Valts Ernštreits and US-born literary agent and translator from Latvia, Jayde Will, whereas poets Ryan van Winkle, Alys Conran, and Rhys Trimble were the participants from the UK.

It was the first time such a translation workshop was held in Latvia. The project was a part of the process preparing Latvia for the London Book Fair 2018 where Latvia, along with its Baltic neighbours, is going to be the Market Focus. “The long-term goal of this project is to generate mutual interest among poets, promote collaboration between them, as well as create professional translations of poems to be performed in venues in the UK,” explained the project manager Inga Bodnarjuka-Mrazauska.

Let's see how it went and what the participants thought about this experience:

"These five days in September was an opportunity to do something unusual, to try my hand at working with languages and forms of poetry that I don't even get to encounter every day, and to do it in a relaxed yet productive way. There was always a chance to inquire, clear up, pinpoint, and along with the answers get to know something new about other participants of the workshop, other lands, ways of life, and about oneself as well. There was a kind of a lively festival feel to it."

“I was surprised by how much time translation takes. When you get to the finer details, it turns out, a poem can have eternal depth. Since we were able to ask the authors what is it all about, the story surrounding each poem expanded more and more. Every word like a stone, when turned upside down, revealed that there is a lot more than it seemed at first.”

"I was very lucky with this workshop since I liked the authors whose works I was translating. When discussing the texts, we understood each other with no problems. We only had an argument with Ryan on the last day with regards to the performance, however, it turned out to be a misunderstanding for the most part. Being able to mutually translate poems and delve into the texts of our English-speaking colleagues reminded me what a freedom it is to write poetry and how much I love it."

“This compelling group of contemporary Latvian and British poets spent a week delving into each other's work and lives. It was an productive and intimate process which earned us many new translations, stories, memories and friendships. We hope the work shows the closeness we were lucky enough to share and that we'll be able to continue working together in the future.”

“I found the workshops and interactions with poets in Latvia to be incredibly fun and fruitful. We had a great performance and formed what I hope will be an ongoing relationship between the poets involved. I won't forget my small Latvian vocabulary or my Latvian colleague’s attempts at Welsh! I have a spare stick waiting with one of the organisers which I intend to use soon!"

The poetry translation workshop was organized in collaboration with international platforms “European Literature Live” and “Literature Across Frontiers”, as well as online literary magazines “Poetry Wales” and “The Wolf Magazine”. Similar workshops and readings with various poets are planned in Latvia and Great Britain also in 2017, 2018, and 2019.