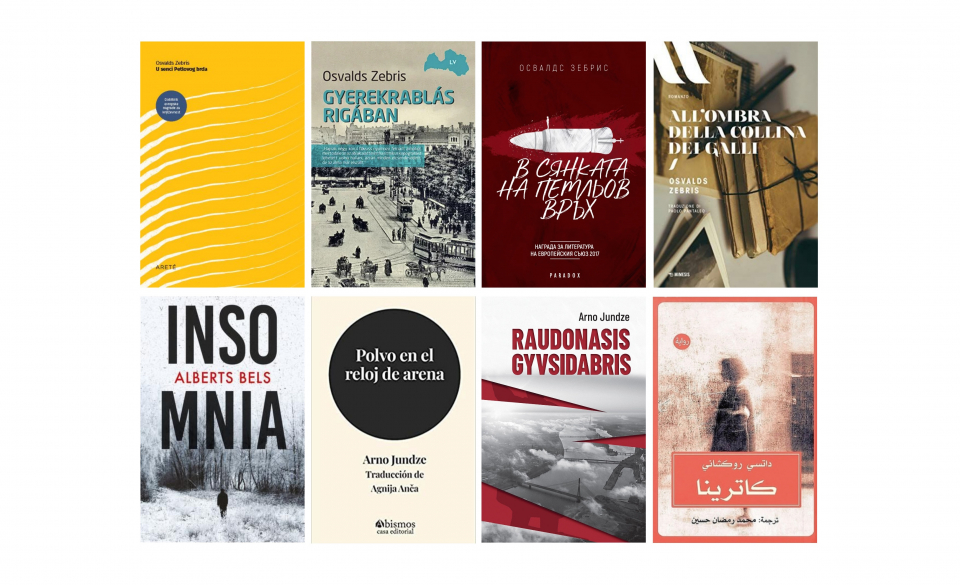 In 2017, Osvalds Zebris’ “In the Shadow of Rooster Hill” earned him the EU Prize for Literature. The book is the first work in the historical novel series “We. Latvia. The 20th century.” It is set in 1905 in Riga where the Russian Tsar is slowly losing power over his vast empire, and the city is being rocked by worker riots, violence and pogroms. The events of this time played a major role in the making of the Latvian nation and laid foundations for the independent Republic of Latvia. The novel poses a tough question — how an individual path can lead from a seemingly justified fight in the name of society to a life of crime and deep despair? Translated by Paolo Pantaleo as “All’ombra della Collina dei galli”, the novel has been published by “Mimesis Edizioni” in Italy. The novel has also been published by the Bulgarian “Paradox” publishers (“В сянката на петльов връх”, translated by Milen Mitev),  the Hungarian “L’Harmattan Kiadó” publishing house (as “Gyermekrablás Rigában”, translated by Laczházi Aranka) as well as the Serbian “Areté” (as “U senci petlovog brda”, translated by Aleksandr Šurbatovič).

Dace Rukšāne’s novel “Why Did You Cry?” was published in Latvia in 2003. The main character of the novel is Katrīna, a seventeen year old girl from Riga. She tells us about her adventures traveling across the Soviet Union, climbing mountains, and dealing with relationships in her family. “This is a story of how a naive schoolgirl acquires the scent of a grown woman and helps herself out of the life’s pit dug by others,” says poet Inese Zandere. This year, the novel was published by the Egyptian publishing house “Sefsafa Publishing”, translated by Mohamed Ramadan.

Alberts Bels’ novel “Insomnia” has been published for the second time by the British “Parthian Books” (translated by Jayde Will). This famous novel  has become a classic of Cold War writing and continues to exert a major influence over Latvian literature. His poetical political criticism (the book was forbidden from being published for decades) addresses curtailed personal freedoms, where the walls of isolation can mean the protection of our own freedom and maintaining our personal independence, but also something that can ruin our lives forever. The story is filtered through the thoughts, emotions and fantasies of the main character, who is suffering from insomnia and detachment from everyday life, content to observe the people living in his building and the wider world around him from the tired luxury of his apartment and daily routines.

Two books by writer Arno Jundze have also found their way to new readers abroad. His book “Dust in an Hourglass” (“Polvo en el reloj de arena”) has been published by the Mexican “Abismos Editorial” (translated by Agnija Anča). The novel tells the story of a naive young man who dreams of the future and great prospects, but instead ends up being pulled into the war in Afghanistan where he is forced to do everything just to have a future. The echoes of witch trials, death and love in Paris, the walk to the kingdom of silence, and fragments of eavesdropped phone conversations, secretly copied letters, and text messages are all pieces of a puzzle the reader is supposed to put together.

Meanwhile another one of his books “Red Mercury” (“Raudonasis gyvsidabris”) has been published by the Lithuanian “Lietuvos rašytojų sąjungos leidykla” (translated by Jurgis Algimantas Banevičius). The novel concludes the timeline of the historical novel series “We. Latvia. The 20th century.” which consists of 13 novels telling the entire history of 20th century Latvia. “The Latvia of the 1990s is a great background for a proper thriller novel and Arno Jundze has used this opportunity to the fullest. In the more recent history of our country he has found plot twists and events that will keep the readers interest piqued. There is room for murderers and bandits, pleasures of the flesh, and pure and innocent love, as well as cheka informants and the Forest Brethren, the dead and the risen, the spiritually rich and the poor. If I was asked if such things should be written about 20th century Latvia, my answer would be a definite “yes”, if the writer is capable of receiving handfuls of what life gives him,” comments the editor of the novel, Gundega Blumberga.