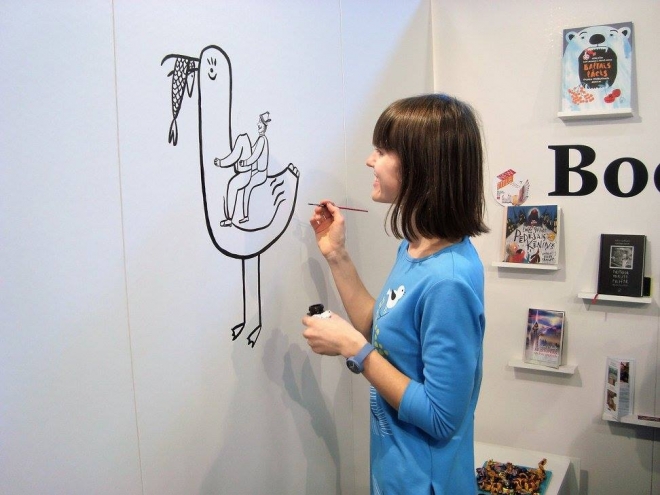 10th – 19th May, Berlin (Germany) is holding a children's literature festival “Berlin Book Islands” (Berliner Bücherinseln). This year, nine authors and illustrators from the Baltic states were invited as special guests. Latvia is represented at the festival by book artists Rūta Briede and Juris Petraškevičs, as well as the director of  “Liels un mazs” publishing house, Alīse Nīgale.

Festival “Berlin Book Islands” was initiated by the German organization “Kulturkind”, and is being held for the eight time this year. During the festival, children in Berlin's primary schools (grades 1 through 6) explore the world of book creation from manuscript to publishing to book stores. For 10 days children have a chance to attend readings, workshops and discussions with their favourite book artists, writers and publishers. Several meet-and-greets at the festival are being hosted by this year's guests of honour – Latvian illustrators Rūta Briede and Juris Petraškevičs.

During the festival, the Humbolt Library in Berlin will be hosting an exhibition of works by Baltic illustrators, open all month long to visitors free of charge. The organizers informed that the same exhibition is also to take place at the next year's London Book Fair in which the Baltic states will be the Market Focus.

Rūta Briede is an illustrator, book designer, and creative editor of the “BIKIBUKS” children's book series. The artist has also created visual solutions for several “Latvian Puppet Theatre” shows. Her comics are often included in comics anthologies and international magazines like “Strappazin” (Sweden), “FinEst” (Finland) and “Crachoir” (France). This year saw the publishing of her picture book “Kaiju karalienes noslēpums” (“The Mystery of the Queen of Seagulls”) which is also Briede's début as a writer.

Juris Petraškevičs is an artist, graphic designer, animator, and curator of international exhibitions. Petraškevičs is also one of the founders of the art book publishing house  “Neputns”, and associate professor at the Art Academy of Latvia. He has participated in many solo shows and joint exhibitions both in Latvia and abroad.

Organization “Kulturkind” was founded in 2008 with a goal to design cultural education programmes for children and young adults.