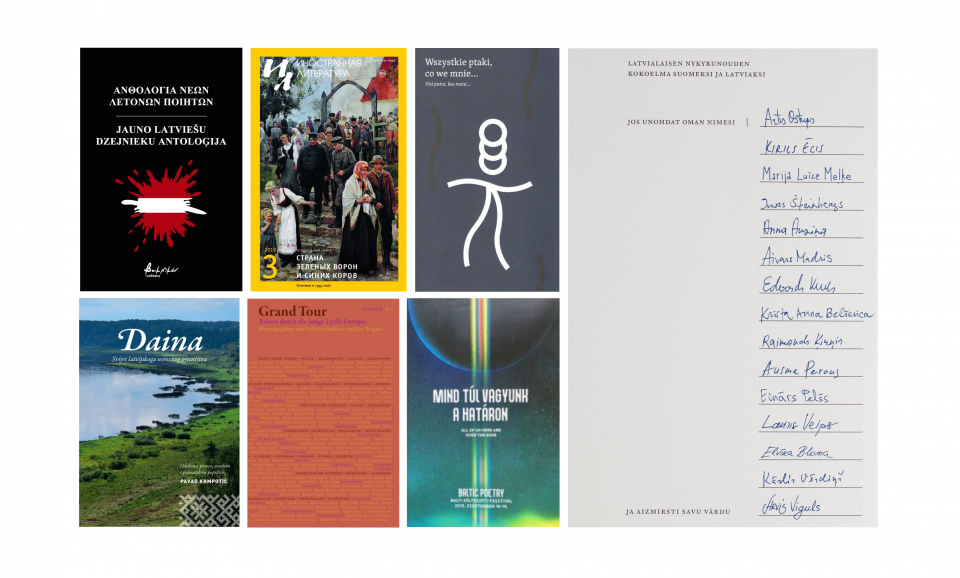 We happen to have missed officially reporting on seven new anthologies of Latvian literature that have been published worldwide in the past year and a half. This must be fixed! The anthologies in question include books comprising works of European and Baltic authors, as well as collections dedicated to Latvian authors specifically.

In the autumn of 2019, Budapest, Hungary, hosted the Baltic Poetry Festival “Balti Költészeti Fesztivál”. In the festival, poets from the Baltic states performed alongside Hungarian poets, and their works have now been published in a poetry anthology “Mind túl vagyunk a határon” (All of us here are over the edge) – with works in Hungarian, Latvian, Lithuanian, Estonian and Russian as well as their English and Hungarian translations. Latvia is represented in this collection by Inga Gaile, Sergej Timofejev and Krišjānis Zeļģis. The poems were translated for the anthology by Jayde Will, Kevin M.F. Platt, Tölgyesi Beatrix and Szépírók Társasága.

Ανθολογία Νέων Λετονών Ποιητών (The Anthology of Young Latvian Poets) was published in Greece and features poems by Agnese Krivade, Artis Ostups, Arvis Viguls, Elīna Bākule-Veira, Ingmāra Balode, Jānis Vādons, Kārlis Vērdiņš, Katrīna Rudzīte, Krišjānis Zeļģis, Madara Gruntmane, Marts Pujāts, and Ronalds Briedis. The book mainly represents the generation of poets that were born in the last decade of the Soviet era and had their books mainly published in the 21st century when the poetry scene in Latvia had significantly changed. As the Soviet censorship that had made the use of symbolic expression essential was loosening its grip in the 1990s, poetry moved from the mainstream conversation into the margins where true poetry fans and literature buffs dwell. This anthology is unique because it is the first time that Latvian poetry is published in Greek. The anthology was published by “Vakxikon”, and translated by Stergia Kavvalou. The book was compiled by the Latvian poet and literary critic Artis Ostups, and the foreword was written by poet Anna Auziņa.

A comprehensive anthology of European poetry was published in Germany with the title  “Grand Tour. Reisen durch die junge Lyrik Europas” (Grand Tour. Travel through the young poetry of Europe). It comprises poems from across Europe, from Albania to Cyprus. The "Grand Tour" through the young poetry of Europe provides poetic provisions for years: the unknown, the surprising and the unheard-of – in original and translation. A journey of discovery for awake spirits. The anthology features Latvian poets Agnese Krivade, Anna Auziņa, Artūrs Punte, Arvis Viguls, Inga Gaile, Inga Ābele, Kārlis Vērdiņš, Semyon Khanin, Sergej Timofejev and Vladimir Svetlov. It was published by “Carl Hanser Verlag”, edited by Jan Wagner and Federico Italiano, continuing the work of their legendary predecessors – Hans Magnus Enzensberger ("Museum of Modern Poetry", 1960) and Joachim Sartorius ("Atlas of New Poetry", 1995).

The Croatian publishing house “Ibis Grafika” has published "Daina. Svijet latvijskog usmenog pjesništva" (Daina. The World of Latvian Oral Poetry), compiled and translated by Pavao Krmpotić. The word “daina” in the Latvian oral tradition is a song that has only four or sometimes six short verses sung to one of several existing melodies. The book places 1,150 Latvian original dainas next to the Croatian translations in eight chapters. The book was created as a result of the author's interest in the Latvian language, Baltic philology and the extremely rich traditional culture of the Baltic peoples. It is the first book in the field of Latvian and Baltic philology in the Croatian language.

Anthology “Wszystkie ptaki, co we mnie…” (All the birds in me...) was published in Poland. The anthology includes poems by Edvīns Raups, Inese Zandere, Ingmāra Balode, Jānis Rokpelnis, Juris Kronbergs, Kārlis Vērdiņš, Knuts Skujenieks, Leons Briedis, Liāna Langa, Māra Zālīte, Uldis Bērziņš. The book was compiled and translated by Olga Anna Wiewióra and published by “Warsztaty Kultury”. The selection of poems was created as part of Wiewióra’s creative residency at the International Writers’ and Translators’ House in Ventspils.