Prose author and literary critic Guntis Berelis (1961) was born in Cēsis, Latvia. Berelis studied in the Faculty of Physics and Mathematics at the University of Latvia, as well as in the Department of Library Sciences and Bibliography. His writing has been published in various platforms since 1986. 1989 – 1991 and 2003 – 2010 he was editor-in-chief for the critiques section of Karogs literary magazine. 1999 – 2016, he was one of the authors and creators of the Studio 9 and Ināra Kolmane’s documentary film series Rakstnieks tuvplānā/The Writer in Close-up producing over 30 documentaries about Latvian writers creating a panoramic overview of contemporary Latvian literary scene. He is one of the creators of Latvian Cultural Canon (2008). Berelis has read lectures at the Culture Academy of Latvia, and several other universities and seminars for librarians, teachers and young authors. He led the prose workshops at the Literary Academy in 2007, 2013 and 2016.

He is the author of around 600 articles on literature, reviews in magazines and newspapers, many forewords, and afterwords for books by Regīna Ezera, Marģers Zariņš, and translations of Umberto Eko, Anthony Burgess, Jorge Luis Borges, Charles Baudelaire, Samuel Beckett, et al. A large number of his articles and critiques have been published in his literary critiques blog Guntis Berelis vērtē. Guntis Berelis has translated short prose, essays, and critiques from Russian. His works have been published in English, Russian, Lithuanian, Belorussian, Swedish and other languages. He is also the author of several travel pieces based on historical events. He is the editor of over thirty books. Berelis has received some of the most important awards in Latvian literature for both his fiction and his academic writing. In 2015, his novel Words Were of No Use was published as a part of novel series We. Latvia, XX Century and shortlisted for the Annual Latvian Literature Award as the best work of prose. Since 1994, Berelis is a member of the Latvian Writers' Union. 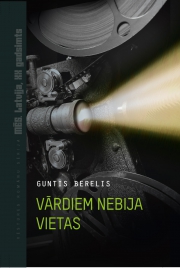 Words Were of No Use was shortlisted for the 2015 Annual Latvian Literature Award. It is 1913 in the coastal city Ventspils, where the first motion picture made in Latvia, called Kur patiesība? (Where Is Justice?) is being shot. A man with “golden hands” named Rudolf Tush and who is unafraid of any type of labour, finds himself joining the film crew by accident and begins building set decorations and doing other menial tasks. Nobody has the slightest idea that this man has a few well-hidden sinister passions. For example, he loves fire, gaining extraordinary amounts of joy from watching buildings burn to the ground, a fact confirmed by his reputation during the 1905 Revolution when he actively participated in burning down manors and castles. Tush has another peculiarity – he is mute. To be more precise, he has the ability to speak, but after a rather foolish encounter with a Kazakh military patrol in 1905, he made a decision to stop speaking entirely. One night, after hearty carousing in a local drinking establishment and watching his first-ever pornographic movie, he accidentally kills someone, and is forced to flee. The story then is transported to 1915. The First World War is raging. Tush is by no means a patriot or fond of the Russian empire, but he is happy about the war, seeing numerous opportunities to profit from it. He experiences combat in 1916, and at one point finds himself on a battlefield where everyone has died following a German gas attack. He runs into the same film crew he had worked with. The film crew had been thinking about making a film about the end of the world and believe authentic corpses would be great for the film. Tush begins planning his bright and happy future, but luck is once again not on his side. Tush is a character with a hidden darkness inside him; he is the kind of small-minded individual that, though he is entirely apolitical by nature, makes war possible at all. 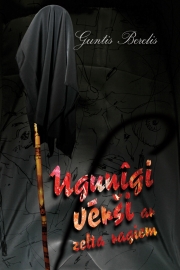 The novel is set in present-day Latvia. There are two separate story lines that are nonetheless linked conceptually and metaphorically. The two stories converge in the final pages of the book, when its two protagonists cross paths. The “Writer’s story” is centered on literary historian named (coincidentally) Guntis Berelis, who is the embodiment of both a pedantically analytical mind and narrow-mindedness. Berelis the historian has made the “discovery of the century”: a hitherto unknown and brilliant poet, Eduards Bīskaps, who wrote in the 1930s and managed to publish a single small volume. Bīskaps, in contrast to the boring and conservative Berelis, is the embodiment of creative passion. The rest of the story involves the relationship between Berelis and Bīskaps. Finally, after one of their conflicts, Bīskaps turns out to have vanished along with his brilliant poetry.

Bārbala Simsone, Nāves deja bez vārdiem, review of Words Were of No Use //  full text in Latvju Teksti magazine. 3, 2015 [LV]

1995, the Rainis and Aspazija Foundation Prize 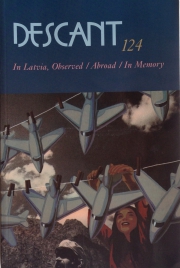 An issue of literary journal in English dedicated to Latvia, includes translations of contemporary Latvian authors. 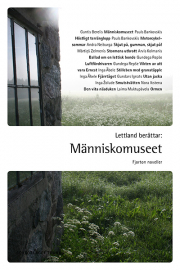